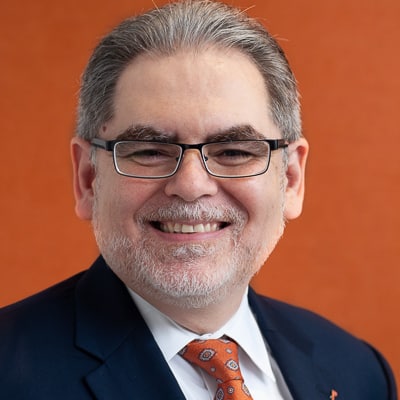 Pedro A. Ramos is president and CEO of the Philadelphia Foundation, one of the first community foundations in the nation. Pedro has spent his career guiding organizations through critical inflection points and redefining how those organizations support and communicate with the communities they serve. He is a collaborative leader with a proven track record of forging next-level partnerships in his roles serving and leading legal, business, government and nonprofit organizations in the region.

Pedro joined the Philadelphia Foundation in August 2015 charged with developing and implementing a bold vision for the organization’s new century of service in the Greater Philadelphia Region. His unwavering focus on fostering growth, leadership and impact has created some of the most powerful and important initiatives in the Philadelphia Foundation’s century-old history. Under Pedro’s leadership, the Philadelphia Foundation has raised over $500 million, grown its assets over 100 percent, and launched large-scale initiatives, including the Regional Foundation, the Lenfest Institute for Journalism, PHL COVID-19 Fund, Key to Community Centennial Initiatives, Key Skills Hub/Catchafire partnership, On the Table Philly, and the PhilaImpact Fund collaboration. Pedro has been active in the City’s Pathways to Reconciliation Steering Committee and its Police Reform Subcommittee and continues to serve on the Blue Ribbon Commission on Pennsylvania’s Election Security.

Pedro’s lifelong passion for affecting positive change in the Greater Philadelphia region is rooted in the lifetime he’s spent living and working in Philadelphia communities. He has served at the highest level of appointed government leadership in Philadelphia, including the City Solicitor, the Managing Director, the President of the Board of Education and the Chairman of the School Reform Commission. As a nonprofit executive, he served as Vice President & Chief of Staff to the President at the University of Pennsylvania, where his portfolio included coordination of Penn’s neighborhood initiatives and strategy. In 2016, he co-chaired the private-public review of Philadelphia’s emergency preparedness and led the design and creation of the City’s current professional emergency preparedness and response organization.

Throughout his career, Pedro has served on fiduciary and advisory boards in the government, business, and social sectors.  He currently serves on the boards of CFLeads, the Philadelphia Award, the Executive Committee of the Greater Philadelphia Chamber of Commerce, the Lenfest Institute for Journalism, FS Energy and Power Fund, and Independence Health Group. An Eisenhower Fellow since 2000, Pedro also serves on the Eisenhower Fellowships Board of Trustees and its Executive Committee.  He previously served on two public company boards (FS Investment Corporation and Amerigas) until each completed a successful merger.