Home | Press Releases | Anthony J. Conti Is the New Board Chair at The Philadelphia Foundation

Anthony J. Conti Is the New Board Chair at The Philadelphia Foundation

PHILADELPHIA, PA (7/5/2016) – Anthony J. Conti has become the chair of the Board of Managers of The Philadelphia Foundation (TPF), effective July 1, 2016. This completes a transition plan announced last year by the previous chair, Lawrence J. Beaser, as the region’s oldest and largest community foundation sets a course for its second century in service to Greater Philadelphia. 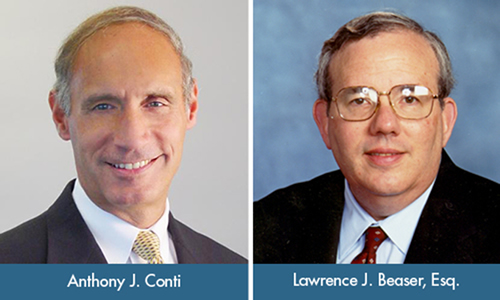 “I look forward to working with my fellow board members and TPF staff in accomplishing bold and lasting positive change, building on the successes of the past,” said Conti, retired Managing Partner of the Philadelphia office of PricewaterhouseCoopers (PwC).

“Tony is the perfect successor to Larry,” said Pedro A. Ramos, TPF’s President and CEO. “They could not have been more thoughtful or deliberate in executing on the transition in board leadership. It really modeled the type of good governance that TPF has long promoted in other nonprofits.”

A board member since 2011, Conti has chaired the Nominating and Governance Committee, and is currently leading the board’s Strategic Planning Committee. He was also on the search committee that selected Ramos last July.

A resident of Ivyland, Pa., Conti had a distinguished career with PwC spanning 36 years, including 29 as a partner. Since his retirement, he has joined four corporate boards: Ametek, Inc. (a NYSE global manufacturing company), Progressive Business Publications (a private education and publications business), Biotelemetry (a NASDAQ health care company) and PEI-Genesis (a global distributor and assembler of precision connectors). He serves as chair of the Audit Committees for Ametek and Biotelemetry.

He also serves on the board of Visit Philadelphia and is the Co-Chair of the Advisory Board to the Corporate Governance Center of Drexel University.

Conti also has had a very active civic career. He served as the Chairman of the 2008 United Way Campaign; as Chairman of the Board of the World Affairs Council of Philadelphia and as a member of the Executive Committee for both the Greater Philadelphia Chamber of Commerce and the United Way of Southeastern Pennsylvania and Southern New Jersey. In 2014, Conti was asked by the regional Board of Directors of the United Way to be that organization’s interim President and CEO, serving as a volunteer in that position, from June 2014 through February 2015.

Additionally, for the City of Philadelphia, he has served as a member of the Private Sector Outreach Board, the Mayor’s Task Force on Tax Policy and Economic Competitiveness, and the Mayor’s and Pennsylvania Secretary of Education’s Business Leader Task Force on Philadelphia’s School Reform Commission.

He has received numerous awards for community service.

Conti succeeds Beaser, a partner for Blank Rome LLP., who had chaired the TPF board for the past seven-and-a-half years. Beaser, who will be known as Chair Emeritus, will remain a board member through December 2016, when he will have completed 20 years of service to TPF.

“I can’t think of a better successor than Tony — I’m confident he will do an excellent job,” said Beaser. “It has been an honor and privilege to lead the board of an organization that does so much good and has such a positive impact on our community.”

Beaser first joined the TPF board in 1995 and served until 2005. He was re-appointed to the board in 2007 by the Philadelphia Bar Association, one of several outside authorities that appoint members of the public charity’s all-volunteer board.

The TPF board reflects the diverse interests of the community, and plays a significat role in establishing policy, reviewing the investment performance of funds, leading the effort to develop assets, and making final decisions on all grants to ensure that the philanthropic wishes of donors are carried out.

One of America’s oldest community foundations (founded in 1918), The Philadelphia Foundation (TPF) is committed to improving the quality of life in the Pennsylvania counties of Greater Philadelphia (Bucks, Chester, Delaware, Montgomery and Philadelphia). A foundation and a public charity, TPF connects philanthropic resources to societal needs. TPF manages assets of approximately $370 million and more than 900 charitable funds established by its fund holders. It distributes about $25 million annually to nearly 1,000 nonprofits as grants and scholarships, and promotes greater philanthropy and stronger nonprofits in service to community needs. To learn more, visit www.philafound.org.