Get Ready to Decide Which Nonprofits Will Be Awarded $1 Million 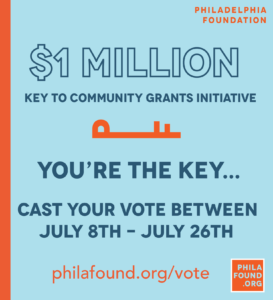 PHILADELPHIA, PA (June 26, 2019) – The Philadelphia Foundation today announced it will seek the public’s participation beginning July 8 to decide which nonprofits will receive $1 million through its Key to Community Grants initiative. From July 8 through July 26, residents of the Greater Philadelphia region will vote online to determine which community solutions will be funded.

“This initiative in celebration of our Second Century of service to the community demonstrates the power we all have to improve lives by engaging nonprofits, in this case by casting online votes,” said Philadelphia Foundation President and CEO Pedro A. Ramos. “We’ve curated several inspiring initiatives all based around building stronger communities, and beginning the second week in July, we will ask the public to choose which ideas resonate most with them.”

Nine winners will be selected in three categories:

The public votes will decide which three nonprofits in each category receive the first place award of a $200,000 grant, which three will be awarded $100,000 grants and which three will be awarded $33,000 grants. Leaders from the nine winning organizations will also be invited to participate in the Philadelphia Foundation’s Leadership Institute in the fall of 2019 and will be included in opportunities for targeted leadership development scholarships and expanded professional network building, which will be supported by additional funds.

Residents are encouraged to visit philafound.org/vote daily throughout the three-week program. A list of locations with free wifi and computer access will be posted on Philadelphia Foundation’s web site during the voting period.

“Vote early and vote daily in all three categories,” Ramos said. “Tell everybody to tell everybody to vote. By letting your voice be heard and sharing your support through social media, you’ll ensure that the programs that matter most to you will have funding to accelerate their impact.”

ABOUT THE KEY TO COMMUNITY GRANTS INITIATIVE

A review panel comprised of Philadelphia Foundation staff, representatives from the grants’ co-presenters and independent experts in the fields of philanthropy and community solutions was tasked with determining the finalists for public voting through research, interviews and evaluation.

The finalists who are contenders will be publicly announced when voting opens on July 8. Voting will continue through July 26. Winners will be announced following a verification period on July 31.

ABOUT PHILADELPHIA FOUNDATION
Founded in 1918, Philadelphia Foundation strengthens the economic, social and civic vitality of Greater Philadelphia. The Philadelphia Foundation grows effective philanthropic investment, connects individuals and institutions across sectors and geography, and advances civic initiatives through partnerships and collaboration. A publicly supported foundation, the Philadelphia Foundation manages more than 900 charitable funds established by its donors and makes over 1,000 grants and scholarship awards each year. To learn more, visit philafound.org.