PHILADELPHIA, PA (11/7/2019) — The Philadelphia Foundation and Mural Arts today dedicated the foundation’s Centennial Legacy Mural “Strength in our Bonds” at its permanent location at 23rd and Market Streets in Philadelphia.

“This mural is a testament to community philanthropy,” Ramos said.  “We knew that the artist, the concept, the process, the participants, the art all had to manifest the ‘community’ in community foundation and it has.”

The colorful mural spanning 20 feet high and 120 feet wide on a previously vacant wall owned by PennDot that fronts PECO’s parking lot includes iconic images of Philadelphia, dazzling mosaics and the faces of some of the 1,000 residents who donated more than 2,000 hours to help create the mural. A paint day at the Cherry Street Pier drew 500 participants.

The mural celebrates Philadelphia Foundation’s centennial year and recognizes its role as a connector, activator and convener of philanthropy in the Greater Philadelphia seven-county region.

“The Philadelphia Foundation is a quintessential Philadelphia organization that is generating change all the time,” Golden said. 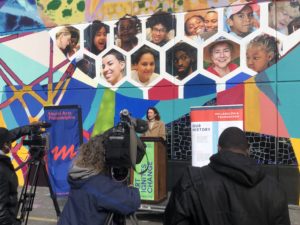 Eighteen workshops and paint days were held throughout the region over a four-month period to gain insight into how individuals conceptualized their neighborhoods, what aspirations they held for their communities in the future, and to give residents a role in the creative process and creation of the mural.

“Together we wrote poems, created mosaics, took photographs, sketched, made bottle bricks, and of course we painted,” Golden added. “The highlight was the giant paint day at Cherry Street Pier where we had residents from every neighborhood in the region.”

“Great public art starts off with conversations,” Martinez noted. “One of the goals for this project was to strengthen the bonds of different communities across the city of Philadelphia and the surrounding area. The mural is meant to reflect those interactions.”

The dedication celebration culminated in the cutting of a ribbon symbolizing the debut of the mural, which will stand as a testament to the power of philanthropy to bring people together and move the region forward.