On Sept. 26, 2017, the first new public sculpture to be sited at City Hall since 1923 will pay tribute to the 19th century Philadelphia civil rights activist, scholar, athlete and military officer Octavius V. Catto.  The dedication, which is open to the public, will take place at 11 a.m. on the south side of City Hall.

The Philadelphia Foundation is honored to serve as the fiscal sponsor for the O.V. Catto Memorial Fund. The fund accepts tax-deductible contributions that supported the creation and construction of the statue and now will be used to maintain the Memorial and to support educational programs in Philadelphia about Catto. 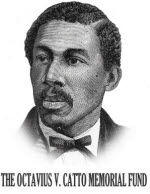 Widespread recognition for Octavius Catto has long been deserved. Catto taught at the Institute for Colored Youth, a predecessor to Cheyney University; played on the city’s first African-American baseball team, The Pythian Baseball Club, which he organized, and was an active leader of St. Thomas’ Church.

Appropriately, the dedication will take place on National Voter Registration Day.  Catto had led the ratification push for African-Americans to get the vote through Pennsylvania’s ratification of the 15th Amendment. He was shot to death on Election Day 1871 at Ninth and South streets while promoting voting rights for African Americans. 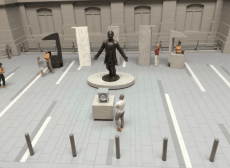 The Catto Memorial will be the only public work of art in Philadelphia dedicated to an individual African-American. Called A Quest for Parity, the installation includes a prominently placed ballot box. The memorial’s design also is an homage to Catto’s successful desegregation of the city’s horse-drawn streetcars in 1867, nearly a century before similar actions fueled the Civil Rights movement in the South.