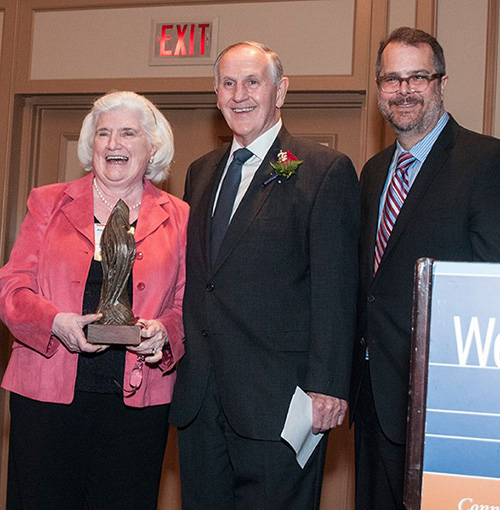 PHILADELPHIA, PA. (4/29/2015) — R. Andrew Swinney, President of The Philadelphia Foundation, has been honored by the Welcoming Center for New Pennsylvanians as the recipient of the Dennis Clark Solas Award. The award honors those who are able to reach beyond a narrow sense of self and be enlarged and enriched by embracing a common humanity.

Noting that Dennis Clark also led a community foundation for 17 years, presenter and Welcoming Center founder Anne O’Callaghan said, “Both see every human life as having equal worth. Each of these great men believed that poverty and great human suffering comes as a result of inequality in access to education and economic opportunity. Both worked to end unfairness and injustice where they found it.”

She added, “Andrew’s tenure at The Philadelphia Foundation has been a gift to the citizens of the Delaware Valley. He has the mind, heart and soul of a humanitarian. He is personally charming, gracious and unassuming. He is generous with his time and his advice and he has worked tirelessly to ensure that every foundation dollar is spent in the most effective way to promote better education, stronger economic growth and a more stable, prosperous Delaware Valley.”