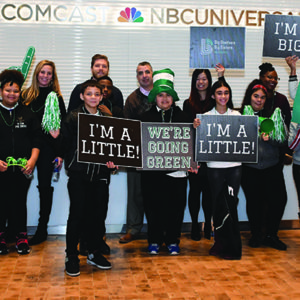 How the Partnership Started

We first teamed up to launch an innovative youth mentoring partnership to broaden educational opportunities and career horizons for under-served youth. Named in honor of retired Comcast co-CFO John Alchin – a dedicated board member and advocate for Big Brothers Big Sisters – the John Alchin Beyond School Walls program matches Comcast employees with students from a local elementary school for a one-to-one workplace mentoring experience. 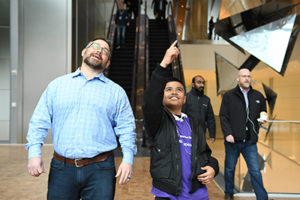 Twice a month during the school year, the students meet with their Comcast employee at Comcast Center. The program introduces children to jobs in media and technology at an early age, allowing them to experience what it means to work for a corporation and the educational requirements needed to achieve professional success. During the visit, the matches also share lunch, stories and camaraderie – all with the goal of helping students reach their fullest potential, personally and academically.

What It Led To 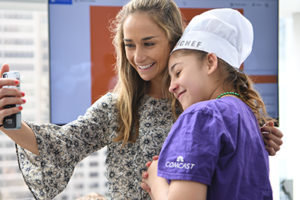 In the first year, there were 35 matches. Twelve years later, Comcast has expanded Beyond School Walls to 14 cities with 331 mentoring matches – the largest workplace-based mentoring program in the country with Big Brothers Big Sisters of America.

This year, as part of Comcast’s focus on closing the digital divide, all the students received their own iPad to use as a tool for learning digital skills and Internet safety with their employee match.

Comcast’s commitment goes even deeper. Comcast has provided vital support on many levels, including national and local board membership, leadership development and training for Big Brothers Big Sisters staff leaders, and sponsorship of the “Bigs of the Year” Awards.

Since the partnership’s founding in 2008, Comcast has committed a total of more than $75 million in cash and in-kind support, including airing public service announcements.

This partnership is the quintessential example of employee volunteerism and a relationship that we are extremely proud of.

We know the demands of today’s busy work environments coupled with personal life commitments can be limiting. We believe we have something for everybody!

Employees can get involved by volunteering to mentor a young person in the community or at the schools our youth attend. This can be a commitment of as little as one hour every other week or as much as several hours two to four times per month.

The Beyond School Walls program has expanded to include 28 companies in Southeastern PA and Southern NJ. It requires a smaller time commitment than our community mentoring programs – a convenient option for employees to mentor youth that isn’t time-intrusive.

We have large scale events where employees can volunteer. In fact, our largest events are run by skills-based volunteer committees.

We are also constantly seeking diverse candidates to serve on our Governing and Regional Advisory Boards of Directors. We have boards representing Philadelphia, Montgomery, Chester and Delaware counties in Pennsylvania, and one representing Southern New Jersey.

The Power of Corporate Volunteers

We see employee volunteerism as a catalyst for monumental change in building stronger communities and helping nonprofits like us realize our mission. I would like to see all companies take pride in serving their communities by prioritizing volunteerism and community investment as a critical pillar of their overall corporate strategy. Imagine the potential impact if all company employees volunteered to serve their communities, even in the smallest of ways.